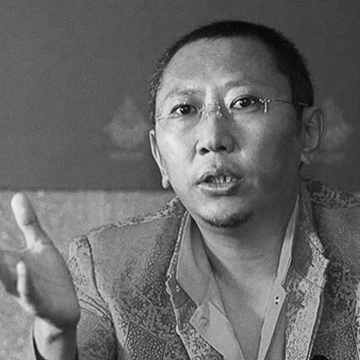 His Eminence Shyalpa Tenzin Rinpoche was born in the foothills of the Himalaya Mountains where he was recognized as a holy child and began training as a Lama at the age of four. Rinpoche attended the Buddhist University in Sarnath, Varanasi, and later received transmissions and empowerments from many of the greatest Nyingma and Kargyu masters of our time. Rinpoche is a lineage holder of the Great Perfection (Dzogchen) tradition — his primary root teacher is His Holiness Chatral Rinpoche.

With great compassion and wisdom, Shyalpa Tenzin Rinpoche teaches us how to actualize the essence of this precious human life and live completely and fully. Rinpoche’s spontaneous, refreshing, and often humorous style of teaching reconnects us to our fundamental nature. He teaches us how to seize the moment and live with clarity, kindness and genuine understanding. Rinpoche's powerful blessings remove obstacles on the spiritual path and his gentle guidance beckons us home to the purity and simplicity of our true nature.

Throughout the world for over 25 years, Rinpoche has conducted countless retreats, seminars, and empowering sessions, including talks at Harvard, Yale, Wesleyan, and Naropa Universities, among many other venues. In 2003, Rinpoche established Buddhafield as his centre of compassionate activity in the United States of America. Buddhafield is a pristine sanctuary of over 40 acres just 90 minutes north of New York City. In Kathmandu, Rinpoche has also established the Shyalpa Monastery and Nunnery that houses over 200 monks and nuns.
More about Shyalpa Tenzin Rinpoche
Back to events